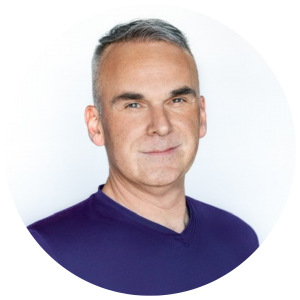 “We are excited to have Tim on board as our CDEO,” said Koby Rodriguez, Acting CEO. “Bringing on highly experienced professionals into key leadership roles is part of our strategic growth plan that will ultimately improve services for the entire LGBTQ+ community especially BIPOC communities, and I am excited to work with [Tim] to amplify the Center’s mission of creating a region where all LGBTQ+ people feel safe, welcome, and can thrive.”

Tim Johns (He/Him/His) is originally from Lima, Ohio, and has an MA in non-profit administration from New York University’s Stern School of Business. He has worked for two Planned Parenthood Affiliates for the last 15 years, most recently with the Utah Affiliate headquartered in Salt Lake City. While with Utah’s Planned Parenthood, Tim oversaw a dramatic diversification and expansion of private fundraising dollars to underwrite comprehensive reproductive health care services and education for Utah’s fast-growing populations. Tim also oversaw the affiliate’s political fundraising to help encourage candidates that support reproductive choice and other progressive policies at Utah’s Capitol. In 2015, Utah’s affiliate received the affiliate award for excellence from Planned Parenthood Federation of America due to the rapid expansion of the fundraising program in Utah. Under Tim’s leadership, the number of donors has quintupled, and fundraising dollars increased by 361%. Planned Parenthood’s emergency reserves increased by 10 million dollars. His newly created Planned Giving program received over $2 million in legacy giving commitments.

Tim has served on the Utah Pride Center’s Board of Directors for the past six years. During this time, he was Secretary of the Board, chaired the mental health committee, and volunteered each year at the Utah Pride Festival and Parade, which attracts over 60,000 individuals from Utah and neighboring states. While serving on the Board of the Utah Pride Center, Tim realized that his heart lies in helping LGBTQ+ individuals succeed and stay healthy. He quickly applied for the open External Affairs Officer position at the Sacramento LGBT Community Center. Tim is eager to work with the diverse populations of the Sacramento region and diversify and grow the fundraising revenue streams as he has done for several organizations throughout his 25-year career in fundraising and marketing.

“I am very excited to join the Center during this tremendous time of growth,” said Tim Johns, the Center’s CDEO. “Finalizing the recent Welcome Home Campaign is a very fulfilling goal of mine, and then continuing this momentum into our newly redesigned space to help Sacramento’s most vulnerable in our quickly growing LGBTQ+ communities throughout the Sacramento region.”

As the Center’s CDEO, Tim is leading the Center’s most significant fundraising efforts, including the Welcome Home Campaign, the Center’s biggest fundraiser to raise six million dollars to pay off and renovate the Center’s Lavender Heights building on 1015 20th St.

“I plan to build on the already successful fundraising program and enhance our individual and planned giving programs,” Tim continues. “We’re going to continue to grow and diversify our funding streams to reach all that need our services and programs.”

Those interested in how to get involved in our Welcome Home Campaign or would like to learn more about it can visit www.saccenter.org/welcomehome. If you’d like to say hello to Tim or discuss a donation toward the Center, please email tim.johns@saccenter.org.

The Sacramento LGBT Community Center works to create a region where LGBTQ+ people thrive. We support the health and wellness of the most marginalized, advocate for equality and justice, and work to build a culturally rich LGBTQ+ community.