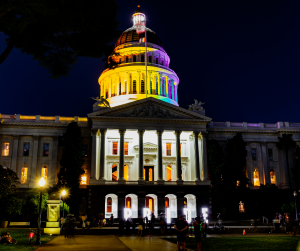 The Sacramento LGBT Community Center is celebrating in response to two bills being signed into law. Assembly Bill 439 which adds the “X” gender markers to death certificates, and SB-112 the Budget Act of 2021 which includes funding the Transgender Wellness and Equity Fund at $13,000,000. These two bills will have a positive impact on transgender and gender non-conforming individuals in California.

Assembly Bill 439 adds the “X” gender marker to death certificates and ensures that individual’s gender is affirmed at the end of their life. In 2017, California became the first state in the nation to add the gender neutral “X” marker to birth certificate allowing transgender and gender non-conforming individuals to obtain affirming state documents such as drivers licenses. This helps prevent harassment or questioning because documents did not align with the person’s outward gender expression. AB 439 extends the “X” gender marker to death certificates to ensure that a person’s identity is affirmed even in death. From the text of the bill:

“Existing law requires the person completing the certificate of death to record the decedent’s gender identity as indicated in the specified legal documents, or if the specified documents are not presented, as indicated by the person or a majority of persons with control over the disposition of the remains, as specified. This bill would authorize the decedent’s gender identity to be recorded as female, male, or nonbinary.”

Senate Bill 112, the Budget Act of 2021 funded several initiatives for the LGBTQ+ community, but of most note is a $13 million-dollar allocation to the Transgender Wellness and Equity Fund. This is the largest state budget allocation that has been given to the transgender community and is a continuation of efforts dating back to last year’s approval of AB 2218 which created the Fund. AB 2218 established the Transgender Wellness and Equity Fund to create or fund TGI-specific housing programs and partnerships with hospitals, health care clinics, and other medical providers to provide TGI-focused health care, as defined, and related education programs for health care providers.

“Both of these bills are a small step towards creating a more equitable state for Transgender, Gender Non-Conforming, and Intersex people” said Alexis Sanchez, Director of Advocacy and Training for the Sacramento LGBT Community Center. “Transgender people still face significant barriers while accessing healthcare and other services. Additionally, many struggle to have their identities recognized and validated in every aspect of their lives. These bills help address that.”

There are still a number of bills on the legislative floor that will hopefully create opportunities and build equity for LGBTQ+ people statewide. The Sacramento LGBT Community Center offers Name and Gender Marker Change services with financial assistance for those who qualify.