LGBT History Month is a month-long annual observance of lesbian, gay, bisexual and transgender history, and the history of the gay rights and related civil rights movements. LGBT History Month originated in the United States, and was first celebrated in 1994, making this year the 24th year running.

Our education system is usually who we defer to when it comes to teaching our youth about historical figures. But with schools, textbooks and historians often whitewashing, straight-washing and otherwise ignoring the accomplishments of those outside the straight, white, cis, male category, it is time for us to make our history known. So, each day this month we will highlight a queer icon from the past and present that we should all know. This is week three of LGBT History Month. 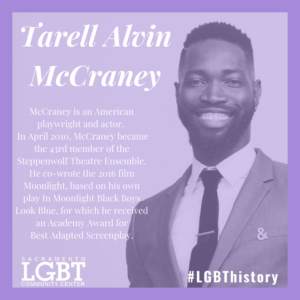 Tarell Alvin McCraney is an American playwright and actor. Since July 1, 2017, McCraney has been the chair of playwriting at the Yale School of Drama.  In April 2010, McCraney became the 43rd member of the Steppenwolf Theatre Ensemble.

He co-wrote the 2016 film Moonlight, based on his own play In Moonlight Black Boys Look Blue, for which he received an Academy Award for Best Adapted Screenplay.

He attended the New World School of the Arts (NWSA) in Miami, Florida, receiving the exemplary artist award and the Dean’s Award in Theater. While attending NWSA, he also applied to and was awarded an honorable mention by the National YoungArts Foundation (1999, Theater). In May 2007 he graduated from Yale School of Drama’s playwriting program, receiving the Cole Porter Playwriting Award upon graduation. He also is an Honorary Warwick University Graduate.

As an actor, he has worked with directors such as Tina Landau of the Steppenwolf Theatre Company, Chicago, Illinois, David Cromer, and B. J. Jones, artistic director of the Northlight Theatre (where McCraney co-starred in the Chicago premiere of Joe Penhall’s Blue/Orange), and developed a working relationship with Peter Brook and Marie-Hélène Estienne of the Bouffes du Nord, Paris. 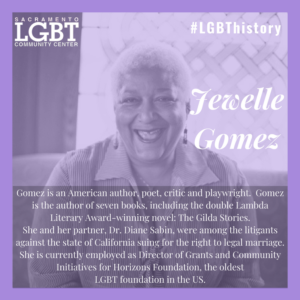 Jewelle Gomez is an American author, poet, critic and playwright. Her writing—fiction, poetry, essays and cultural criticism—has appeared in a wide variety of outlets, both feminist and mainstream. Her work centers on women’s experiences, particularly those of LGBTQ women of color.

Describing herself as a possible “foremother of Afrofuturism,” Gomez is the author of seven books, including the double Lambda Literary Award-winning novel The Gilda Stories (Firebrand Books, 1991) .

This novel has been in print since 1991 and reframes traditional vampire mythology by taking a lesbian feminist perspective; it is an adventure about an escaped slave who comes of age over two hundred years.

She and her partner, Dr. Diane Sabin, were among the litigants against the state of California suing for the right to legal marriage. The case was brought to the courts by the City Attorney of San Francisco, the National Center for Lesbian Rights (NCLR) and the American Civil Liberties Union (ACLU). GOMEZ has written extensively about gay rights since the 1980s, including articles on equal marriage in Ms. Magazine and has been quoted extensively during the court case.

She is currently employed as Director of Grants and Community Initiatives for Horizons Foundation, the oldest lesbian, gay, bisexual and transgender foundation in the US. She formerly served as the President of the San Francisco Public Library Commission. She was on the founding board of GLAAD and early boards of the Astrea Lesbian Foundation and the Open Meadows Foundation. 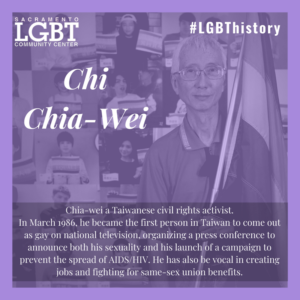 Chi Chia-wei is a Taiwanese civil rights activist. In March 1986, Chi became the first person in Taiwan to come out as gay on national television, organizing a press conference to announce both his sexuality and his launch of a campaign to prevent the spread of AIDS/HIV.

In 1986, Chi applied to the Taipei District Court notary office with a request for a notarized marriage license, which was promptly rejected; his appeal to the Legislative Yuan was also rejected in harsh terms. Soon afterward, on August 15, he was detained by police with being involved with a robbery, which he denied. Sentenced to a five-year sentence, he was imprisoned for 162 days that year, after which he was subsequently pardoned by a judge and freed. His imprisonment was customary of political dissidents of the late White Terror period, which ended the next year.

After meeting his current partner in 1988, Chi worked as the country’s only AIDS/HIV activist, operating a halfway house for HIV and AIDS patients and advocating for safer sex among the country’s LGBT community.

After the Ministry of Justice ruled that marriage was only allowed for opposite-sex couples in 1994, Chi attempted to obtain a license again in 1998, eventually appealing the case in October 2000 to the Council of Grand Justice to offer a justification for their refusal to grant him a marriage license. A judge on the panel rejected his appeal due to the appeal not specifying the existing laws and regulations inconsistent with the Constitution.

On 24 May 2017, the Constitutional Court ruled in Interpretation No. 748 that the Civil Code’s restriction of marriage is unconstitutional, and ruled that same-sex couples will be allowed to marry on or before 24 May 2019. 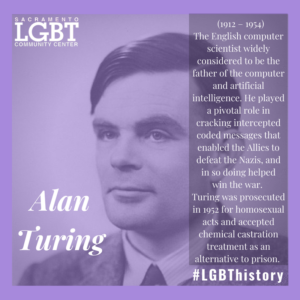 (June 23, 1912 – June 7, 1954) Alan Mathison Turing was an English computer scientist, mathematician, logician, cryptanalyst, philosopher, and theoretical biologist. Turing was highly influential in the development of theoretical computer science, providing a formalization of the concepts of algorithm and computation with the Turing machine, which can be considered a model of a general purpose computer.

Turing is widely considered to be the father of theoretical computer science and artificial intelligence.

During the Second World War, Turing worked for the Government Code and Cypher School (GC&CS) at Bletchley Park, Britain’s codebreaking center that produced Ultra intelligence.  He devised a number of techniques for speeding the breaking of German ciphers, including improvements to the pre-war Polish bombe method, an electromechanical machine that could find settings for the Enigma machine. Turing played a pivotal role in cracking intercepted coded messages that enabled the Allies to defeat the Nazis in many crucial engagements, including the Battle of the Atlantic, and in so doing helped win the war.

After the war, Turing worked at the National Physical Laboratory, where he designed the ACE, among the first designs for a stored-program computer.

Turing was prosecuted in 1952 for homosexual acts, when by the Labouchere Amendment, “gross indecency” was a criminal offence in the UK. He accepted chemical castration treatment, with DES, as an alternative to prison.

In 2009, following an Internet campaign, British Prime Minister Gordon Brown made an official public apology on behalf of the British government for “the appalling way he was treated.” Queen Elizabeth II granted him a posthumous pardon in 2013. The Alan Turing law is now an informal term for a 2017 law in the United Kingdom that retroactively pardoned men cautioned or convicted under historical legislation that outlawed homosexual acts. 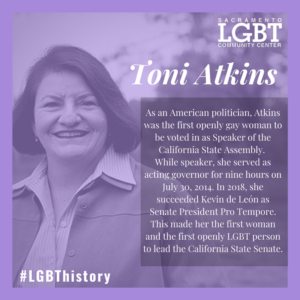 In January 2014 she was elected by the Democratic caucus to be the next Speaker of the Assembly, and on March 17, 2014, she was unanimously elected Speaker by the full Assembly. She was the third woman and the first acknowledged lesbian to be elected to that position. She was the first lawmaker from San Diego to be elected Speaker. She formerly served on the San Diego City Council from 2000 to 2008, including a term as Acting Mayor. While speaker, she served as acting governor for nine hours on July 30, 2014. In 2018, she succeeded Kevin de León as Senate President Pro Tempore. This made her the first woman and the first openly LGBT person to lead the California State Senate. 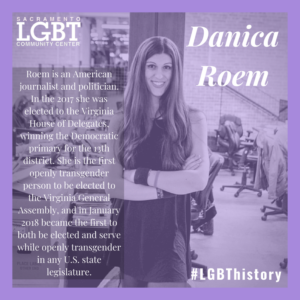 Danica Roem is an American journalist and politician of the Democratic Party. In the 2017 Virginia elections she was elected to the Virginia House of Delegates, winning the Democratic primary for the 13th district on June 13, and the general election on November 7.

In January 2018, Roem was included on the cover of Time Magazine in their “The Avengers” feature, highlighting new female candidates and elected officials from around the country. She was a journalist for ten and a half years. Roem first got interested in politics in 2004 following President George W. Bush’s proposal to add a constitutional amendment to ban same sex marriage. After that, she was interested in looking into how the government operates and how she could change it. Roem was recruited to run for state delegate by her local Democratic Party, more specifically, by State Delegate Rip Sullivan, the recruiting chair for the Virginia House Democratic Caucus.

Roem ran against Bob Marshall, who was a 13-term incumbent representative. Marshall is a self-described “chief homophobe” and was a sponsor on Virginia’s bill to end same sex marriage and Virginia’s bathroom bill.

Her campaign was notable for the discrimination she faced. Marshall consistently attacked Roem’s gender identity through his advertisements and she faced cissexism from some of the constituents in the district. She was also attacked by a conversion therapy advocate, who stated that Roem was trans because her father committed suicide and her grandfather failed to serve as an adequate role model for her. Roem stated she never wanted the focus to be about her gender identity, and instead focused mainly on traffic issues in the district that she had faced. 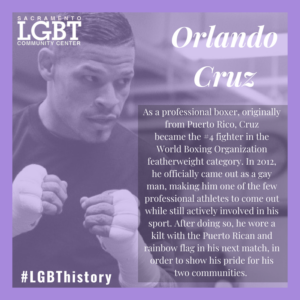 Orlando Cruz is a professional boxer, originally from Puerto Rico. Orlando, whose nickname is “The Phenomenon,” started boxing at the age of 7, in order to gain discipline and to stop fighting his bullies on the street.

He trained for many years as a fighter and in 2000 he joined the Puerto Rican team competing in the Sydney Olympics. He began boxing professionally in December of that same year in a bout in Puerto Rico, which he won. For the next nine years, Orlando remained undefeated. He is currently ranked #4 by the World Boxing Organization in the featherweight category.

In 2012, he officially came out as a gay man, making him one of the few professional athletes to come out while still actively involved in his sport. After doing so, he wore a kilt with the Puerto Rican and rainbow flag in his next match, in order to show his pride for his two communities. Orlando has noted that coming out has helped him to feel more free and to become a better boxer.

[For more icons everyone should know head over to LGBT History Month.]

Stay tuned all month as we introduce our community to more LGBTQ history-makers.

If you aren’t already getting our newsletter in your inbox, let’s change that right now.  Click here and get calendar event, breaking news and calls to action for our community.

The Gender Health Center (GHC) and the Sacramento LGBT [...]

COVID-19 : Restricted Services, Response, and Update on Events at the Center

For more than 40 years the Center has supported the health and wellness of the most marginalized. We understand there is increasing concern amid the Coronavirus outbreak and we want to assure you that the health and safety of our clients, staff, and community are of paramount importance. Read more below: